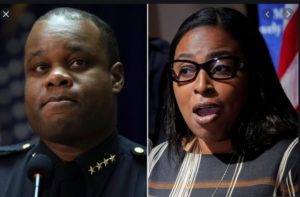 Just one week after saying he would retire by month’s end Police Chief Le’Ron Singletary was fire by Rochester Mayor Lovely Warren on Monday over the death of Daniel Prude.  In addition, the Mayor called for a federal investigation of Mr. Prude’s death.  Not stopping there, she also suspended Tim Curtin, considered by many to be the city’s top lawyer and the city Communications Director Justin Roj without pay.

“We have a pervasive problem in the Rochester Police Department, one that views everything through the eyes of the badge.  The culture of policing in Rochester must change, ”  Warren said.

Prude’s death ignited a wave of ongoing protests in the city while local activists and police union officials have demanded Warren step down.

“… Mr. Prude’s death was not taken as seriously as it should have been by those who reviewed the case throughout city government at every level,”  Warren continued.

Mr. Prude, age 41and father of five children,  had experienced mental health problems when the cops found him naked on a street in March.

The police felt it necessary to both handcuffed and place a mesh “spit hood” over his head.  He stopped breathing, became brain-dead and died in a hospital one week later.

“I have apologized to the Prude family and this community for the failures that happened along the way, including my own,” Warren said. “As mayor, I own these failures.”