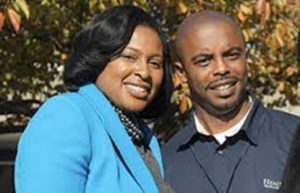 Both are each charged with criminal possession of a firearm, a Class E felony, along with two counts of endangering the welfare of a child, a Class A misdemeanor and two counts of failure to lock/secure firearms in a dwelling — a misdemeanor in violation of the Rochester City Code.  Warren and Granison are scheduled to be arraigned on new charges at 10:30 a.m. on Wednesday.

The mayor has previously been indicted on campaign finance violations.  Her husband was recently arrested for both drug and weapon charges.

According to prosecutors, the new charges stem from a search warrant conducted by law enforcement in a months-long drug ring investigation. That search warrant was executed at 93 Woodman Park, where Granison resides with Warren, the homeowner.

The pistol and rifle were found in the home where their 10-year-old daughter was left alone, resulting in the charges unveiled Friday.

Following Granison’s initial arrest in May, the mayor said she had a separation agreement with her husband and she said she did nothing wrong. She also said the investigation was politically motivated.