GENESEO – Village Mayor Richard Hatheway released a statement Friday laying out the details leading up to Thursday’s federal detention of seven people on Mary Jemison Drive and that police did their job and did it well.

Hatheway’s statement comes after Village Trustee Mary Rutigliano advocated for the release of the seven people, two adult women and five children, to the media and at protests during and following the detention. Hatheway’s comments are as follows:

Please indulge me as I try to set the record straight, to provide some facts.
A Village Police Officer pulled a vehicle over for speeding on a State highway. The driver was not able to produce a driver’s license, only a passport, the authenticity of which could not be verified. The owner of the vehicle was not present.

As in all cases when an officer is not able to verify documentation, outside assistance is sought. Some times it is DMV, sometimes State records, sometimes Secret Service, sometimes FBI. In this instance the only identification produced was a passport. The Police officer had no idea whether this person was an outstanding citizen with an unblemished record, was on the run from a previous incident, or worse yet, was engaged in illegal activity. There was no way he could know anything about this person. If he had simply ignored the potential problem and sent the driver on her way, he would have seriously compromised his responsibilities as an officer of the law. He instead followed protocol and contacted the one agency that could verify the driver’s identity, that being the Border Patrol.

What seems to be lost in the reaction to the incident is that the reason attention was called to the vehicle in the first place was because it was exceeding the speed limit enough to be pulled over. What would be the reaction if the Police Officer released that driver, who then was subsequently involved in a serious motor vehicle accident? What would be the liability of the Village, and what would be the outrage to that scenario?
Geneseo Police Officers are human beings just like the rest of us. They have families. Their first responsibility is to ensure the safety of those within our jurisdiction. They do it well, and in my estimation followed the appropriate protocol in their response to a vehicle that was going at an unreasonable speed on a State highway in a residential area.

Rutigliano spoke with reporters in the early hours of Friday morning while at a protest advocating for the seven peoples’ release in Irondequoit and again later Friday morning.

“People are fired up. They’re calling ICE and calling congress,” said Rutigliano later Friday morning. “Geneseo is having the right response and I’m glad to be part of it.” 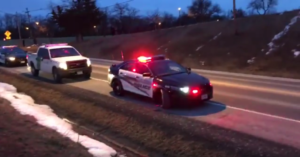