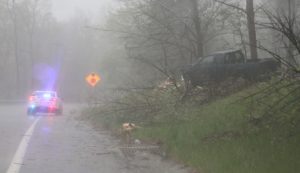 As of 6 p.m., first responders are currently handling several emergency calls including multiple reports of trees down and multiple car accidents.

Drivers should be aware of multiple unexpected road closures across the County.

A pickup truck struck a tree on Maple Beach Road in Groveland just before the rain began. A Livingston County Sheriff’s Deputy is still at the scene awaiting removal of that vehicle.

Another accident is reported in the area of 2357 Mumford-Scottsville Road in Caledonia. First responders are at the scene of that accident.

Drivers in West Sparta especially should be aware of multiple calls for trees down. Traffic is closed on Dansville Mount Morris Road due to a utility pole down with the transformer on fire. Multiple trees are reported to have fallen on live wires, causing small fires.

Given the ample recent rainfall, and limited flooding, this evening’s storm is forecast to cause more flooding. Livingston County is currently under a flood warning until 7:45 p.m.

The County is no longer under this afternoon’s tornado watch. 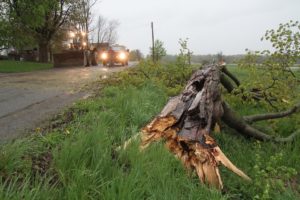