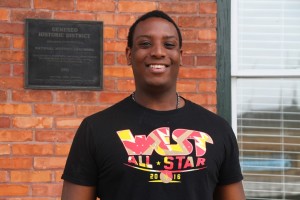 Cook, 20, is the second African American to be elected to any public office, at the county, town or village level, since Livingston County was established in 1802.

Cook recognizes that a very small percentage of Geneseo and Livingston County residents are black. According to the 2014 census, 3 percent of Livingston County’s population identified as African American. However, he maintains as he did during his campaign that the political field is open to anyone who has the drive to run for public office.

“I think that everyone has the right to representation,” said Cook. “People of color, students, young people, everyone has the opportunity to serve their community, and I hope to be an example of that.”

According to Livingston County Historian Amie Alden, Dale Griffin was the first ever African American elected to a public office in Livingston County when he won Geneseo Trustee as a Democrat in 1978. Born in Kalamazoo, Michigan, he joined the Navy as an electrician aboard aircraft carriers. A shipmate, Billy Lucas, brought him on leave to Rochester, where he met his future wife, Roberta Coltzom, of Geneseo.

Griffin moved to Geneseo to get away from the city noise and continued a life of service to the Geneseo. He was a member of the Geneseo Kiwanis Club, the VFW, and was a lieutenant in the Geneseo Fire Department.

Geneseo Mayor Richard Hatheway met Griffin but did not work with him directly as a Trustee. He said that he welcomed Cook to the Board as he would any other Trustee, and praised him for being an Eagle Scout.

“I welcome Matt to the Board just like any other person,” said Hatheway. “I would just as soon focus on his qualifications as a public servant as being of any particular race.”