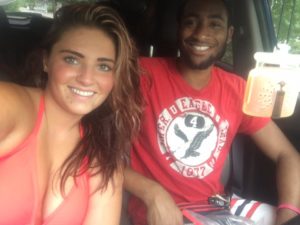 YORK — Marcus Postell, 22, has been identified as the deceased in a stabbing Monday night on Fowlerville Road.

According to Livingston County Sheriff Thomas Dougherty, Danielle Allen, Postell’s girlfriend, called 911 to report a domestic disturbance at 3410 Fowlerville Road on the night of Nov. 22. When Sheriff Deputies arrived, they found Postell deceased and Allen injured.

“This was a long scene. I am proud of my Deputies who worked tireless hours,” said Dougherty. “We are focusing on these two individuals. […] I want to stress that there is no danger to the community, even the resident who lives in the other side of the duplex.”

An ambulance transported Allen to the hospital with injuries. Dougherty said that at no point was she taken into custody, and no charges have been filed so far.

Dougherty is now officially considering this a homicide investigation.

Investigators determined that Postell was stabbed with a knife. However, the Monroe County Medical Examiner will determine the official cause of death.

Dougherty confirmed that Allen has family ties to a law enforcement agency, but clarified that she has no ties to the Sheriff’s Office.