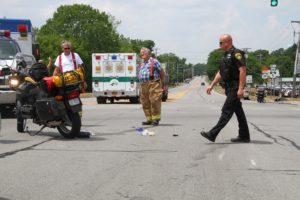 AVON – Two motorcycles collided at the stop light on Rtes. 5 and 20 near Interstate 390 Exit 10 Wednesday afternoon.

According to first responders on scene, the husband and wife pair were riding their motorcycles from their home state of South Carolina to Buffalo when the husband stopped for the stoplight and the wife collided with his rear at about 12:40 p.m.

The husband’s motorcycle fell on top of him, breaking his leg. The injury is not considered life threatening.

The wife was ejected from her motorcycle. She was checked in an ambulance but did not have any readily apparent serious injuries.

The pair were on their way to Buffalo for a BMW event.

Firefighters with Lima and East Avon responded to the scene alongside Lima and Avon ambulances, the Livingston County Sheriff’s Office and New York State Police. 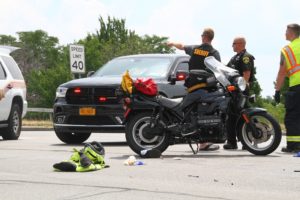 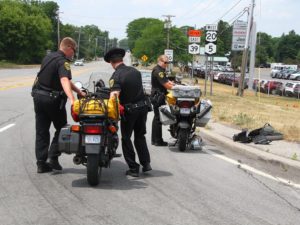