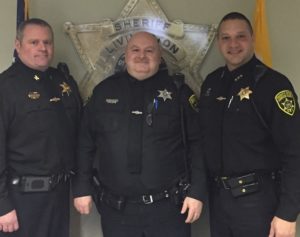 LIVINGSTON COUNTY – A Livingston County Deputy Sheriff is using his well-earned retirement from nearly 30 years of service to begin work at the Federal Building in Rochester.

At a ceremony in the Correctional Services area of the Sheriff’s Office, Sheriff Thomas Dougherty presented Deputy Matt Templeton with a plaque in thanks for his service, the past 11 years and 1 month of which were spent as Court Security at the Livingston County Courthouse.

At the Federal Building, Templeton will join those who are tasked with the safety of those working in and visiting federal offices out of Rochester, including the offices of Senators Chuck Schumer and Kirsten Gillibrand and the federal courthouse.