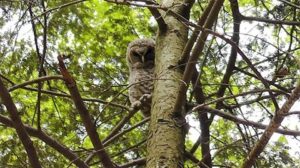 LIVINGSTON COUNTY – At the south end of Letchworth State Park on Wednesday, a man took his camera into the woods. The birds are breeding, the flowers blooming, and waters moving deep within the layers of shale in the park. Everything is passionately springing to life.

The man’s name is Ken Wallace, one of the park’s most frequent and devoted visitors. He saw quite a few animals who seemed either unaware or undisturbed by him that morning. Looking down, he saw songbird feathers on the ground, usually a sign that a predator has killed a bird. Then he had the odd feeling that he was not alone.

“Have you ever had that feeling that you are being watched? Well I did and when I looked up, about eight feet above my head sat an owl,” said Wallace. “I’m here to tell you that you will never win a staring contest with one of these guys! I stealthily reached for my camera and snapped off a couple of shots before I left him alone.”

It was a baby barred owl, the author of one of America’s most unmistakable nighttime sounds. Its haunting “who-cooks-for-you” call reverberates in forests across North America.

Wallace watched the owl, and the owl watched back, likely with a belly full of songbird.

“I was careful not to disturb him and as I looked back as I walked away his gaze never left me,” said Wallace. “I think we were both fascinated by each other’s presence.”

After posting the photos to Facebook, others began commenting to identify the young owl and share other photos of owls they have encountered in their adventures.

According to the New York State Department of Environmental Conservation, barred owls typically nest in cavities or take over old hawk, squirrel or crow nests. They begin to court in February and breed from March to August. Normally, two to four eggs are laid, which hatch in about a month.

When the young leave the nest, at about four weeks, they cannot fly, but crawl among the branches using their beaks and talons.

Parent barred owls care for the young for at least four months, much longer than most other owls. The songbird that the baby owl ate may have been caught by a parent and brought to the young one.

Once their primary flight feathers grow in at about 35 to 40 days, they look like fully adult owls and take off.

Young tend to settle within a few miles of their parents’ territory. Pairs mate for life, and territories and nest sites are maintained for many years. 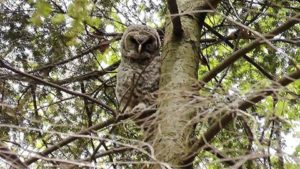