GENESEO — Clair Ryan, 87, has a passion for making paper models and sharing them with the people he meets. And on Sep. 29, he will be able to share his models with everyone at the Noyes Takes Flight fundraiser as part of the centerpiece decoration for the event.

Ryan is a four-time cancer survivor, and went through treatment at Wilmot Cancer Institute. He is no longer undergoing cancer treatment, but still visits Noyes Hospital to receive occasional magnesium infusions to help his heart. Whenever Ryan returns to Noyes, he brings his latest models to show the staff. 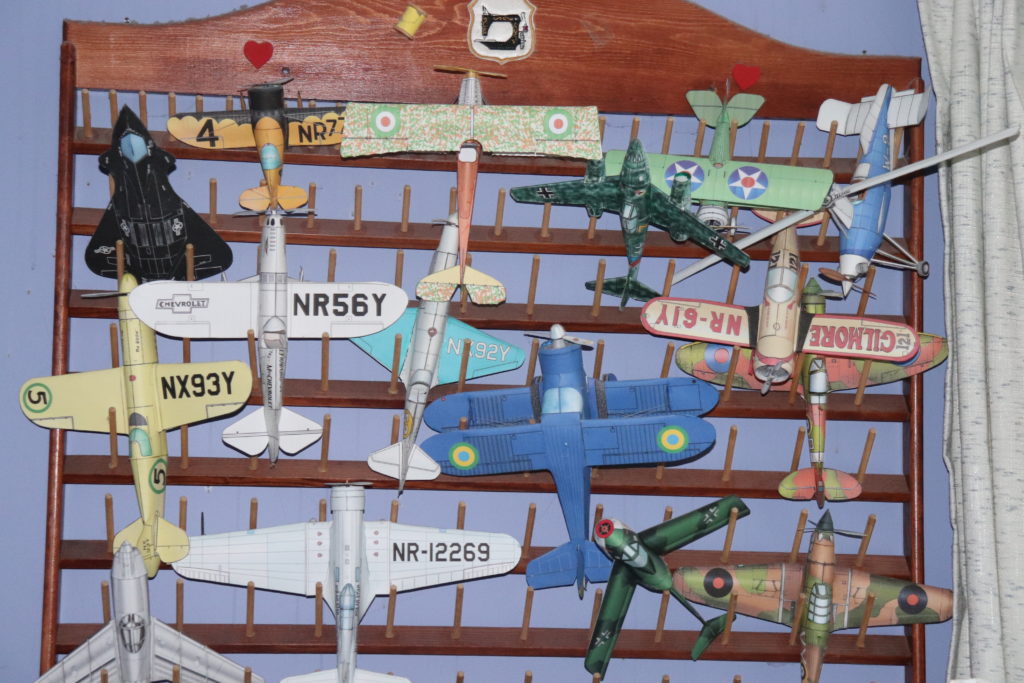 Ryan’s model planes are made entirely out of card stock and paper, but look more realistic than many store bought replicas. (Photo/ Tim Henry)

The center piece will include some of the model airplanes that Ryan has made. However, Ryan’s collection also includes classic cars, military vehicles, construction equipment, motorcycles, animals, and musical instruments. All of Ryan’s models are made from patterns that he prints onto card stock. He then cuts, folds, and glues the pieces together.Ryan says that this process can take between 10 hours and 3 weeks depending on the number of pieces. Some models have as few as 20 pieces, while others, such as his model of a GG1 type Electric Locomotive, consist of over 600 individual pieces. 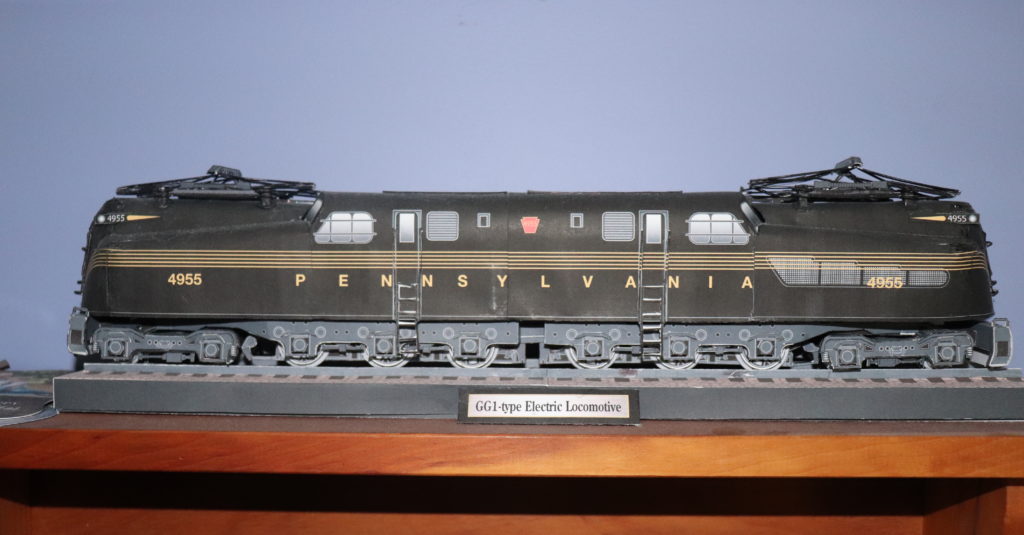 Another impressive aspect of Ryan’s models is that many of them include moving parts such as wheel, propellers, and dump truck beds. The detail in Ryan’s models is also amazing, and it is especially noticeable in the two scale model motorcycles, a Yamaha V-Max and a Yamaha YA-1, the first motorcycle ever built by Yamaha. 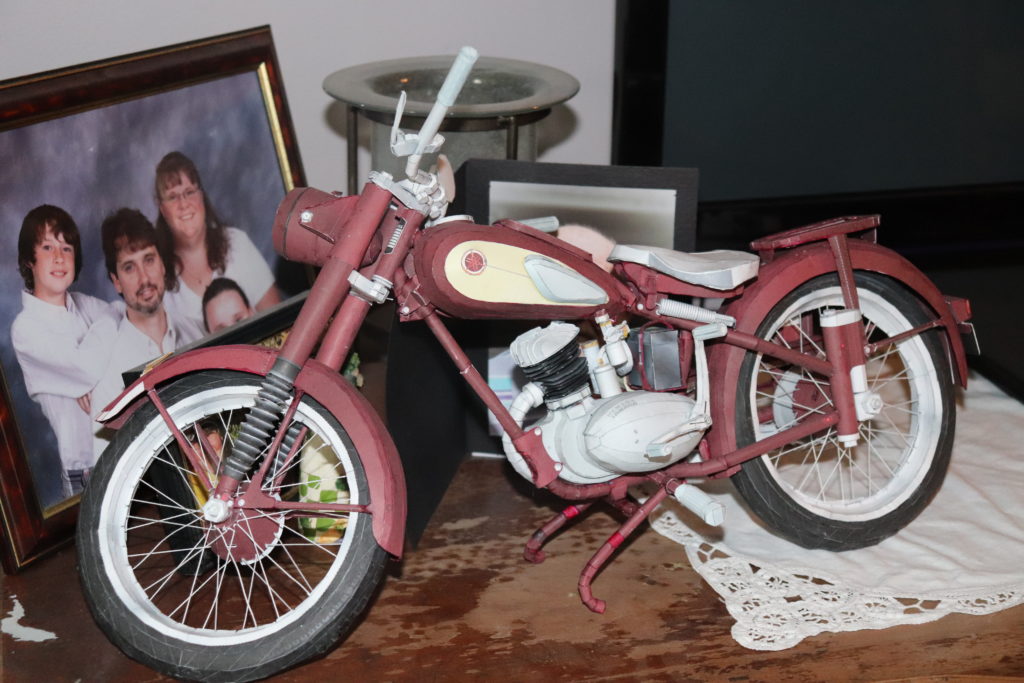 The Model of the Yamaha YA-1 motorcycle. Ryan used embroidery thread to make the spoke for the wheels. (Photo/ Tim Henry) 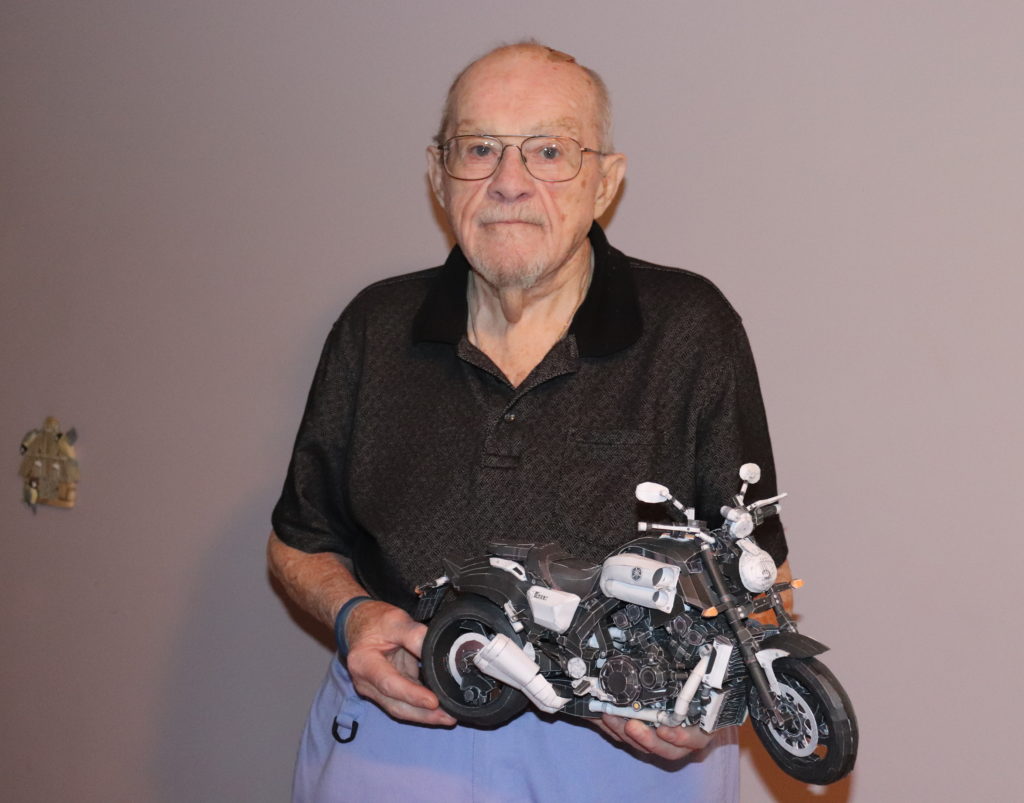 Ryan shows off one of his favorite models, a Yamaha V-Max motorcycle (Photo/ Tim Henry)

Ryan says that he enjoys making his models because it give him something creative to fill his time with, and keep his hands nimble.