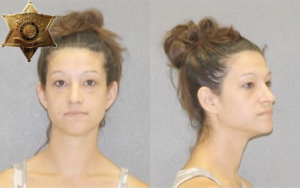 LIVONIA – The Livingston County Sheriff’s Office arrested a Livonia resident on a bench warrant and allege that she had several unprescribed controlled substances.

According to a press release from Sheriff Thomas Dougherty, Rebecca Hubbard, 30, was arrested for misdemeanor Criminal Possession of a Controlled Substance in the Seventh Degree.

The Livingston County Sheriff’s Office reports that on Aug. 19, Deputy Robert Holt stopped a vehicle on Richmond Mills Road in the Town of Livonia. Hubbard, a passenger, had an active bench warrant for misdemeanor Aggravated Unlicensed Operation of a Motor Vehicle in the Second Degree.

Hubbard was taken into custody for the warrant. Upon her arrest, Deputies alleged that she possessed numerous pills that were not prescribed to her, and are controlled substances.

Hubbard was booked in at the Livingston County Jail.

She has since made bail and been released.