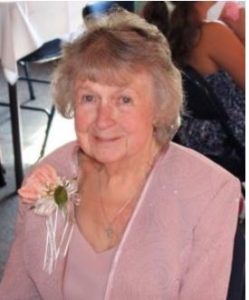 Laurie was born in Hamlin, New York and graduated from Brockport High School in 1945. She was the eleventh child of George and Carrie Rath. She worked at Duffy Motts in Hamlin and The Prudential Insurance Company in Brockport. She married her perfect match, Art Schultz, on September 10th, 1949 at St. John’s Lutheran Church where she was baptised and was a member. She began married life on the Marine Corps base at Quantico where Art was stationed and she worked as a secretary. They eventually moved back to Hamlin and later to Leicester where they raised their seven children. Their retirement years were spent in Grove at “The Cabin” where they lived until 2003 when they moved in with Shellie and her family in Livonia. Besides raising her children, Laurie was a Den Mother, Sunday School Teacher, SUNY Brockport Librarian, St. John’s School Room Mother, Charter Member of the Hamlin VFW’s Ladies Auxiliary, part time Legal Secretary for Mr. Butterfield in Brockport, full time Legal Secretary for Barrett Quirk in Geneseo, Champion line worker, babysitter, member of Genesee Valley Rotary Camp Kitchen Staff and Teacher’s Aide at Dalton Elementary School.

Laurie was a woman of great faith and a member of St. Paul Lutheran Church in Angelica and Epiphany Lutheran Church in East Avon. She was an avid reader of the Bible and was always praying for or looking for ways to help others.  Laurie was known for her great cooking and baking. She was especially famous for her desserts of cream puffs, pastries, pies and cookies. The grandkids remember her for her smiley toast. She liked to sew, knit, draw and paint. She enjoyed games, especially Euchre and BINGO.

The Schultz Family would like to thank everyone for their love, prayers and support during this difficult time. We especially want to thank Livingston County Hospice (Tami Couburn and Karrie) who made it possible for us to carry out her wish to leave this earth peacefully in her home. We are also thankful for her aides Paula Murphy and her “Pal Val” Valeria Biracre. Thanks also to the medical professionals who helped along the way, especially Dr. Aguirre’s office. Laurie will be remembered as a positive, happy, funny, strong woman who was a privilege to know.

Memorial contributions may be made in her memory to Livingston County Hospice, 2 Murray Hill Drive, Mt. Morris, NY 14510, Lutheran Church of Epiphany at the address above, or the Genesee Valley Rotary Camp, C/O Ernie Wiard, 15 Hal-Bar Road, Avon, NY 14414.

To send a condolence or share a memory please visit: www.doughertyfuneralhomes.com