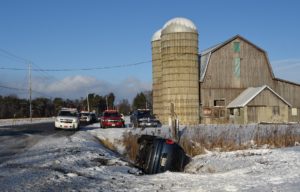 NOTE: Livonia Fire Chief PJ Dwyer initially reported at the scene that two people were transported to the hospital but later clarified that three were actually transported.

According to first responders at the scene, the vehicle was northbound on Rte. 15 (South Livonia Road) when it ran off the right shoulder, struck the end of a culvert and rolled over into a ditch.

All three people inside were injured. One was trapped and had to be extricated by firefighters.

All injured occupants were transported to hospitals for treatment of non life-threatening injuries.

The Livingston County Sheriff’s Office investigated and found that the vehicle had slid on a patch of ice and lost control. No criminal behavior is thought to have contributed to the accident.

The Livonia Fire Department, responded to the scene with Livonia EMS and Livingston County EMS.

A medical helicopter was put on standby after the initial emergency call but it was never called to the scene. 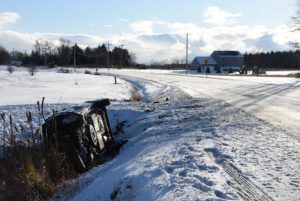