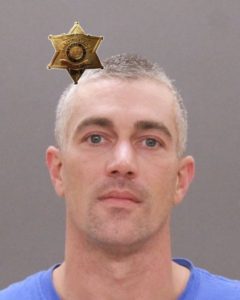 Sheriff Thomas J. Dougherty reports the arrest of a Livonia NY resident on felony charges  after a traffic stop.

On October 7, 2020 at approximately 10:05 pm, Deputy Justin Hilt was assigned to the Sheriff’s  Office STOP DWI Unit when he stopped a vehicle on Rochester Road in the Town of Livonia for a  violation of the NYS Vehicle and Traffic Law.

The operator of the vehicle was identified as 41 year old Michael J. Brown Jr. The Deputy Sheriff  suspected that Brown was under the influence of alcohol and conducted a DWI investigation which  included the performance of standardized field sobriety tests. At the conclusion of the roadside  investigation, Brown was taken into custody for DWI.

Brown was then transported to the Sheriff’s Office Headquarters in Geneseo where Deputy Ken Hall  of the Jail Division administered a breathalyzer test. The test revealed that Brown had a blood alcohol  content (BAC) of .10%.

A records check revealed that Brown had a previous DWI conviction on May 24, 2016 and that his  driver’s license had been revoked on August 8, 2016 for a DWI related incident.

Brown was arrested and charged with felony Driving While Intoxicated and felony Aggravated  Unlicensed Operation of a Motor Vehicle in the 1st Degree. The DWI and AUO charges were felonies  due to the previous conviction and license revocation.

Brown was turned over to Central Booking Deputies at the Livingston County Jail for processing and  issued appearance tickets as the offenses did not qualify for pre-arraignment detention under the  NYS Justice Reform Act. Brown was provided a date to appear in Livonia Town Court in the future