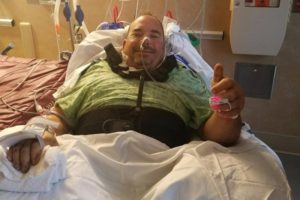 LIVONIA – Friends of Mike West are helping him pull through debilitating injuries from a car strike on Big Tree Road.

On Sept. 22, West, 57, was struck and seriously injured by a vehicle while trying to stop traffic for a boat to back into a driveway. On Sept. 27, Rick West created the GoFundMe fundraising page here and explained how challenging recovery will be.

“I named this campaign ‘Miracle for Mike’ because that is what he needs right now,” posted Rick West. “To know Mike is to love Mike. He is a very hard working, proud man striving to make a buck every minute of every day. Now he is laid up the the hospital with many months of rehabilitation in front of him and skyrocketing bills coming in the mail. While remaining strong in the face of everybody that’s visited him, he was just told that he won’t be able to take a step for at least 120 days which is crushing to him.”

West’s injuries are serious. Rick West posted that Mike is lucky that he is not paralyzed.

“On Thursday night when Mike arrived in the trauma unit at Strong Memorial Hospital, the initial assessment was that he sustained two fractured vertebra, pelvis fractured in two places, two broken ribs, one on each side, a nasty concussion including a brain bleed along with some internal bleeding,” posted Rick West. “When he went into surgery on Friday afternoon, the surgeon told his wife Shari that L1 and L3 were fractured and that he was confused as to why Mike wasn’t paralyzed from this injury. Mike now has 8 stainless steel rods and screws holding his back together.”

“On Sunday, he went back into surgery to repair the pelvis that was supposedly broke in two places,” posted Rick. “The doctors found another fracture resulting in an internal stainless steel plate screwed in both the front of Mike and another plate on his back side inorder to hold his pelvis perfectly square. This will be with him for the rest of his life.”

Fortunately, Mike’s family have never left his side. In the past two days, the campaign has raised over $4,000 toward the $25,000 goal. Donations are intended to help with impending medical bills.

“Mike’s wife Shari, daughters Leanne and Lindee, future son in law Tim Johnson and members of his immediate family have been by Mike’s side around the clock to comfort him and to be his rock,” posted Rick. “We know that his road to recovery is going to be long and very difficult and to not have to worry about the loss or decrease in income will be huge. On behalf of Mike West and family, we truly appreciate everyone’s support and extreme generosity during these tough days and coming months.”