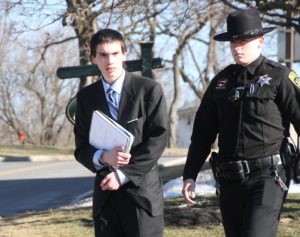 Kyle Ladue, 24,  of Livonia, formerly of Springwater, was charged with criminal mischief on Nov. 10 as the result of damage he did to a home on Lakeville Rd., when he became angry over a used car deal he had participated in.

According to Livingston County Sheriff’s deputies, Ladue bought the car from a resident at his home in Lakeville Rd.  Mr. Ladue, apparently upset over the deal, returned to that home on November 6th.  There he smashed windows of three cars and damaged a security camera.

Mr. Ladue was the subject of a Genesee Sun article in March, 2017 which covered his court case resulting his charges of 18 counts of rape down to two misdemeanors.