LIVONIA – Livonia’s own John Kelley says that he will always cherish his time in Livingston County as he sits as one of New York County’s newest Acting Supreme Court Justices.

Kelley’s Livingston County’s ties are strong. He was a partner at the Geneseo law firm Jones, Skivington and Kelley, now the Law Office of Peter Skivington. He was elected Livonia Town Justice three times, was a two-term member of the Attorney Grievance Committee for the Seventh Judicial District. He was acting-Livingston County Public Defender, President of the Livingston County Bar Association and Livonia Rotary Club, a volunteer Livonia firefighter, and a youth baseball and hockey coach.

“I must admit that it’s one of the few times that I’ve been rendered speechless,” said  I suppose that one thing that could be said is my gratitude for having the experience of living and working in Livingston County. I had the benefit of practicing law before some great judges, including Robert Houston, Ron Cicoria, Ted Wiggins, Gerry Alonzo,and Richard Wesley, all of whom were more that just legal scholars–they were respectful, compassionate judges who tried their very best to do the right thing on every case. There is not a day that goes by when I don’t think about how they would handle certain cases.  I always will cherish my time in Livingston County and the friends that I have there.”

After earning his bachelors’ degree from Ithaca College, Justice Kelley graduated from the George Mason University School of Law in 1987 as a member of the university’s Law Review. After long and varied service in Livingston County, he relocated to New York City in 2002, working for both the NYS Attorney General and NYS Department of Financial Services. In 2013, he was elected to a ten-year term on the Civil Court in Manhattan. In that position, he has served in Bronx Family Court for two years, and in New York City Civil Courts in Brooklyn and Manhattan for two years.

Now, he will serve as Acting Supreme Court Justice for New York County. 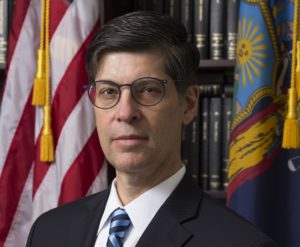