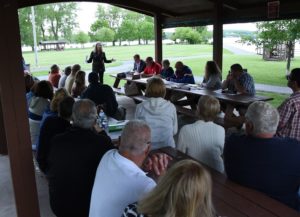 LIVONIA – The Town Board said at their Thursday meeting that they are prioritizing potential new policy to address the recently explosive issue of an unwelcome stretch of four rental properties, but that such change, if it happens, will have to come slowly.

Livonia Town Supervisor Eric Gott committed to addressing the issue to the about 50 members of the public who attended the meeting to voice serious concerns with four rental properties in the 3500 block of Pebble Beach Road. Kati Dougherty, daughter of Pebble Beach residents Pete and Barb Dougherty, expressed concerns and presented the Town Board with a letter expressing their family and neighbors’ interpretation that the rentals constitute a code violation. About eight others took the floor to say they are concerned about threats to public safety, excessive noise from late night parties, congested parking and exposure of small children to vulgar language.

“I can tell you that the town attorney, myself and Adam Backus continue to work on potential zoning regulation changes,” said Gott. “Any code revisions are referred to the County Planning Board for review and advisement. Also, there are public hearings, so we have to advertise those public hearings and hold public hearings. So that’s time. And there’s nothing we can do to speed that time up. […] I wish I had better news for you, but there’s a legal process that has to take place moving forward. We will move as rapidly and quickly as we can. Unfortunately there will be some things that are out of our control.”

Town Attorney Jim Campbell said that while the public has legitimate concerns, the law is not always black and white and immediately shutting down these rentals as a ‘code violation’ will not be possible.

“Your concerns are well-spoken and certainly legitimate,” said Campbell. “One thing that I think we all need to be aware of is that the code as it exists now is not capable of solving these types of issues, so the resolution is not in our existing code, which I think means that we need to focus on rewriting some regulations and these are policy decisions as well. So I think the Town Board needs to see some examples of what other communities have done and how it has worked because putting it on paper is one thing but implementing it and enforcing it is an entirely different thing. And that, frankly, is going to be where the challenge is in terms of rectifying some of these scenarios.”

Campell said that another challenge is walking the line between limiting the number of week-long or weekend rentals without infringing on property owners’ rights.

“Do you want to limit, as a community, rentals to 30 days or more when historically you’ve had an area that has allowed summer rentals and weekend rentals,” said Campbell. “I don’t know if you’re going to hear from people that have utilized their properties in that fashion for a long period of time. My concern is how do we address your issues, limit the use and still not implement a taking from those people either because they have property rights and vested interest over a long period of time. […] How do we draft regulations that accomplish what the Town Board wants, limiting the potential for liability and maximizing the potential for effectiveness? It’s not an easy task.”

Campbell added that noise ordinances are generally not seen to be effective. The solution, he said, is going to be in drafting new local laws with more specific and updated definitions than the current code, which was passed about 25 years ago.

“Can properties be rented on less than a monthly basis and still be done in a way that doesn’t destroy neighborhoods and legacies, which is what you all are talking about and that makes a lot of sense,” said Campbell. “We’re working on it. It’s a challenge. It’s not going to be a quick fix, I hate to tell you.”

Residents insist that the town code clearly states that renting these four houses for a week or a weekend at a time constitutes a code violation. The letter circulated and signed by Pebble Beach neighbors and delivered to the Town Board Thursday expresses an interpretation that Livonia Town Zoning Code 150-31 NR Neighborhood Residential District and 150-5 Definitions mean that ‘single family dwellings’ are allowed in ‘neighborhood residential districts,’ with a ‘single family dwelling’ defined as, ‘A dwelling unit designed for or occupied exclusively by one or more persons living as a single, nonprofit housekeeping unit.’ The concern is that because the properties are listed for rent, that constitutes a violation of this code.

“If you’re not comfortable saying that it’s a single family dwelling, the current code says that the definition of a motel is ‘a building or group of buildings whether a detached or connected unit used as individual sleeping units designed primarily for transient automobile travelers and providing off-street parking and, if desired, restroom facilities,” said Kati Dougherty. “By this definition, we have a motel. So could we take that angle, that it’s a motel? It’s an unsupervised motel.”

“I personally don’t think the code does much to solve your problem even if we creatively interpret it,” said Campbell. As other members of the public expressed frustration that Campbell’s interpretation of the code was different from what they believe says in plain, black and white terms that short-term renting on Pebble Beach is a code violation, Campbell continued. “The internet has been one of those things that has made a lot of people weekend lawyers because they get on and they can see a statute, or see a section of the penal code, or vehicle and traffic law and they read the black and white letters and they understand the words and the context of their experiences in life and their education, but what they don’t tend to realize is that that’s just a starting place. That’s what courts are for and cases. There’s decision after decision and opinions offered and issued about these things. That’s why things go to court, to be interpreted as a matter of law, not as a matter of common perception. […] I know that’s frustrating, I know that doesn’t always seem to make sense, sometimes it doesn’t make sense to me but it is how it works.”

Gott said that he did promise to update Kati and Pete Dougherty with any further developments from the Town Board on this.

The owner of these four properties, John McCoy, stood before the public Thursday night and said that he felt discriminated against, that his rights are being stepped on, and that it is unfair to single him out because other property owners rent their houses on Pebble Beach. 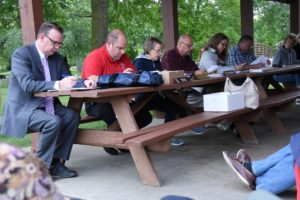 The Livonia Town Board. (Photo/Conrad Baker) 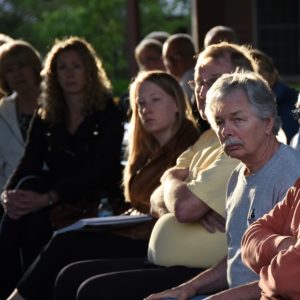 Members of the public at Thursday’s Town Board meeting. (Photo/Conrad Baker)