LIVONIA – The Livingston County Sheriff’s Office arrested a Livonia resident for allegedly driving while impaired by drugs and possessing heroin and Suboxone.

According to a press release from the Livingston County Sheriff’s Office, Heather Robinson, 40, was arrested for misdemeanor DWAI Drugs and two counts of misdemeanor Criminal Possession of a Controlled Substance in the Seventh Degree.

On May 9, 2017 at about 4:30 pm, a traffic complaint was called into the Livingston County Emergency Communications Center (E-911) reporting that a vehicle had been driving ‘all over the road’ and was stopped in the intersection of Stone Hill Road and Plank Road in the Town of Livonia.

Deputy Brandan Flickner of the Sheriff’s Office STOP DWI Unit located the vehicle and alleges that the operator, Robinson, was slumped over the steering wheel. Flickner was able to wake Robinson up.

Flickner then began a roadside DWI/DWAI investigation and took Robinson into custody for DWAI-Drugs.

A subsequent search of Robinson’s vehicle reveal what police believe are a small amount of heroin and two suboxone strips.

Sheriff’s Sergeant James Merrick, who is a certified Drug Recognition Expert, assisted and performed an evaluation on Robinson. Merrick alleges that Robinson was under the influence of a narcotic analgesic and was unable to operate a vehicle safely.

Robinson was turned over to Central Booking Deputies at the Livingston County Jail for processing and pre-arraignment detention.

Livonia Town Justice Robert Lemen arraigned Robinson and ordered her held at the Livingston County Jail on $500 cash or $1,000 bond. 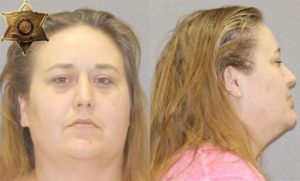