LIVONIA The Livonia Fire Department saved a house from a fire Tuesday night.

According to the Livonia Fire Department, they responded to an emergency call reporting a fire on East Lake Road near Cleary Road at approximately 10:30 p.m.

“The first arriving units confirmed a working house fire with heavy fire on the roof,” posted the Livonia Fire Department to Facebook. “The house was confirmed to be unoccupied. East Avon FD was called to assist with a FAST team. An initial attack was made from the exterior of the building, knocking down the bulk of the fire, and then interior firefighters entered the house to extinguish hot spots.”

Livonia firefighters were responding to a call reporting a carbon monoxide problem at the time of the fire.

Investigators found that the fire was accidental, beginning as a furnace problem.

“The property owners live elsewhere in Livonia and were planning on remodeling this house, so they turned on the furnace to keep it at a moderate temperature so it wouldn’t freeze,” said Kevin Niedermaier, Director for Livingston County Emergency Management. “The furnace was old and malfunctioned, causing the fire. It was a great save by the Livonia Fire Department. Clean.”

Firefighters with Livonia, Lakeville, Hemlock and East Avon Fire Departments responded to the scene alongside Livonia and Livingston County EMS.

Geneseo Fire and Ambulance stood by in Lakeville to cover the town while other units were at the fire. 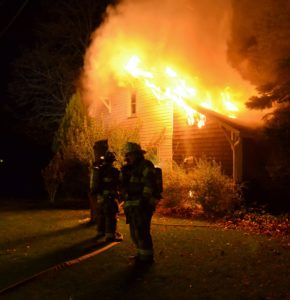