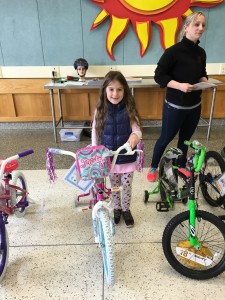 One of the coloring contest winners receiving their new bike. (Photo/CCE Livingston County)

LIVONIA – Livonia Central School hosted a fair to drive home the importance of bike safety on the road.

According to a press release from CCE Livingston County, the fair had over 300 attendees.

The event featured interactive stations that encouraged discussion on measure kids could take to stay safe. There are ample opportunities to remain aware of one’s surroundings: as a child passenger in a car, on a boat, as a pedestrian, and swinging from the monkey bars in the playground. Each station also included games, activities or prizes, with the safety expert at the booth.

The Cornell Cooperative Extension of Livingston County Traffic Safety Education Program includes bike rodeos and workshops for all ages on occupant, wheeled, and pedestrian safety. For information on any of these programs, contact Katelyn Sanders at 585-991-5420 or 585-335-1752 or email kls334@cornell.edu. 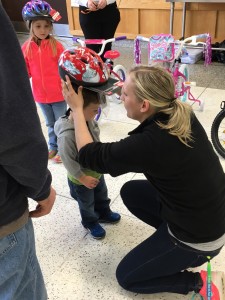