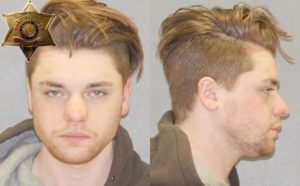 LIVONIA – What began as an emergency call for a car accident turned into an investigation into multiple possible felonies Wednesday morning.

According to a press release from Livingston County Sheriff Thomas Dougherty, Joshua Hoffman, 26, was arrested for felony DWAI drugs, felony Aggravated Unlicensed Operation in the First Degree and several Vehicle and Traffic Law violations, and later felony Grand Larceny in the Fourth Degree.

At about 8:50 a.m. on Jan. 25, the Livingston County Sheriff’s Office Emergency Communications Center received a call for a two-car collision on South Lima Road in the Town of Livonia.

Responding for the Sheriff’s Office was Deputy Michael Donals, who found that the operator, identified as Hoffman, had been traveling eastbound when he left the south side of the roadway and struck a parked car. Deputy Donals suspected that Hoffman was driving while under the influence, conducted a roadside investigation and arrested Hoffman for suspicion of driving under the influence.

Assisting at the scene were Sergeant Joseph Zambito and Deputy Mike Williams of the Sheriff’s Forensic Identification Unit (FIU).

While investigating the accident, the County 911 center received a call from a person saying that their car was stolen and Hoffman, a relative, was the suspect. Investigator Bradley Schneider of the Sheriff’s Criminal Investigations Division alleges that Hoffman took the relative’s vehicle from South Lima Road without permission and crashed it further down the road. Deputies added a Grand Larceny charge.

was consulted and he recommended bail be set at $5,000 cash or $10,000 bond for both incidents. Hoffman was turned over to Central Booking Deputies at the Livingston County Jail for processing and pre-arraignment detention.

Livonia Justice Margaret Linsner arraigned Hoffman and ordered him held at the Livingston County Jail on $5,000 cash or $10,000 bond at the recommendation of Livingston County Assistant District Attorney Justin Hill.