LIVONIA – A Livonia resident is charged with a felony as a suspect in a credit card theft from her co-worker at a Livonia store that was reported Christmas Eve.

According to a press release from Livingston County Sheriff Thomas Dougherty, Jordan Krebbeks, 20, is charged with felony Grand Larceny in the Fourth Degree.

On Dec. 24, Deputies met with a Conesus resident who reported that her credit card had been stolen and used at a convenience store in Honeoye Falls. The case was turned over to Sheriff’s Investigator Dan Rittenhouse of the Criminal Investigations Division for follow up.

The investigation alleges that a co-worker of the Conesus resident had stolen the card while they were both at work at a store in Livonia.

On Jan. 17, the Sheriff’s Office arrested Krebbecks as the suspect.

Krebbeks was turned over to Central Booking Deputies at the Livingston County Jail for processing and pre-arraignment detention. 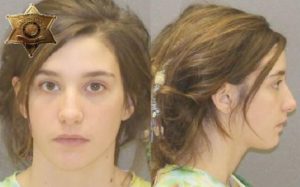