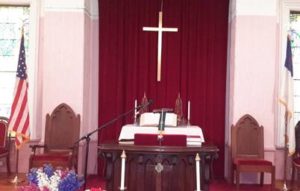 LIVONIA — The South Livonia United Church of Christ is celebrating 200 years this month.

The church’s 100th anniversary was celebrated on March 14, 1916, the exact centennial of its founding, when 81 people shivered on Conesus Lake and cut a hole in the ice for baptisms. This year, the church is opting to take advantage of the warmer weather.

“This milestone for our church is a huge for me as well as the community,” said former church President Clayton Taft. “A lot of people have come and gone but this church being as small as it is we are still going.”

The church was first organized on March 14, 1816. A group met at a local school, and local resident Timothy Baker donated land for construction.

In 1833, the structure was completed as ‘the South Livonia Baptist Society.’

The structure has had a few facelifts and updates to keep it feeling spry. In 1874, the pulpit was changed and galleries removed. In 1921, plain glass windows with green shutters were swapped for stained glass.

The eight windows installed in 1921 (plus another installed later) were each given in memory of family members. On July 8, 1922, an all-day service formally dedicated the windows to family members.

Celebrations will be the weekend of Sept. 17.

Then on Sunday Sept. 18, the church will have a regular service at 10 a.m. A light lunch will be served at 12:30 p.m. and at 1 p.m. there will be a special service by Jim Culbertson to present the Proclamation. There will be stories of the church’s ‘Famous Turkey Dinner,’ the ‘Minister That Made Pickles Popular,’ Native Son Shang Reynolds And Changes To Our Church Building. 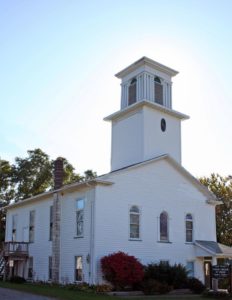