LIVINGSTON COUNTY – The Livonia woman suspected of driving off with a car and gun in late December is under arrest again for allegedly choking a deputy in jail and threatening to escape.

According to a press release from Sheriff Thomas Dougherty, Sharry Habberfield, 53, was arrested for felony Assault on a Peace Officer, felony Assault in the Second Degree, and felony Attempted Escape in the First Degree.

Habberfield was held at the Livingston County Jail since Dec. 19, on the car and gun theft charges.

On Jan. 9, 2018 at about 7:40 a.m. Habberfield asked for a Deputy to assist her in the common area of her housing unit. The Sheriff’s Office alleges that after the deputy entered the housing unit, Habberfield attacked her, choked her, and threatened to kill her and to escape. The deputy was able to defend herself until other Deputies arrived to assist.

Village of Geneseo Justice Thomas Bushnell arraigned Habberfield on the new charges and ordered her held on $15,000 cash or $30,000 bond. 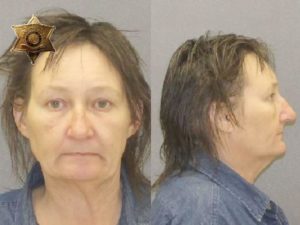