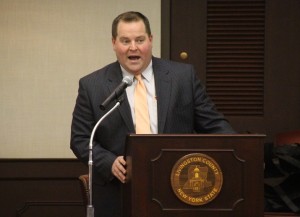 Van Allen thanks the county workers for their generous campaign. (Photo/Conrad Baker)

LIVINGSTON COUNTY – County government employees have donated generously to the 2016 United Way fundraising campaign, surpassing their own goal of $38,000.

“All of the county coordinators obviously outdid themselves,” said Van Allen. “I do have a bit of a confession that when this year’s campaign started, it started off a little slow, it started trickling in. But in true fashion for Livingston County, we were not disappointed. It warms my heart, as I think it warms yours, to see the generosity, the kindness, and the caring of our community that time and time again looks out for one another. I can tell you that I see firsthand the help that the United Way gives to this community, your neighbors, and they do it in such a humble fashion.”

Donations continued to pour in even as Bassett and Snyder walked through the county government center to the meeting.

“We were still taking donations in the hallway and we had to adjust the amount,” said Snyder. “You can see the number is scribbled out.”

Bassett said that the county workers’ campaign would not have been possible without the following department campaign coordinators: Undersheriff Matthew Bean for the Sheriff’s Office, Rene Dietz for the Department of Social Services, Kim Kavanagh for the Center for Nursing and Rehabilitation, Zach Cracknell for the Highway Department, and Alise Rounsville for the Public Health Department.

Van Allen also thanked Karen Rumfola, Regional Director of the United Way of Livingston County, for her tireless efforts for the county’s campaign. The county has set a campaign goal of $250,000 for 2016. 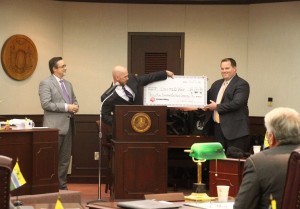