LIVINGSTON COUNTY – Workforce Development is proposing its first staffing change in anticipation of potential cuts to as much as 90 percent if its total funding.

“Most of our programs are slated for 20 to 50 to 100 percent elimination,” said Snyder. “This is the first of hopefully not more. This was kind of a luxury position, so hopefully by eliminating it we start to have a little more flexibility.”

The position costs Workforce Development $17,000 per year. The person currently employed in that position may move to a different clerk/typist position in Livingston County government.

President Trump’s proposed federal budget includes massive cuts to Community Service Block Grants (CSBG’s) that assist people in poverty. Livingston County Workforce Development typically receives about $230,000 in CSBG’s per year. Snyder said that while cutting such programs is not a new idea to the white house, the imminent likelihood of of such cuts is expediting some changes at the county level.

“Obama also stated that there were problems with CSBG’s and considered defunding them,” said Snyder. “We fund delegate agencies like Catholic Charities, Geneseo Parish Outreach, Chances and Changes, and Noyes Lifeline to help those with the lowest of low incomes. Unfortunately, those are the programs that would suffer under these budget cuts.”

The federal budget is not passed yet. Snyder said that while cuts are possible and even likely, the hope is that they will be minimal.

“Hopefully the federal budget includes some of the funding that we rely on to serve residents,” said Snyder. 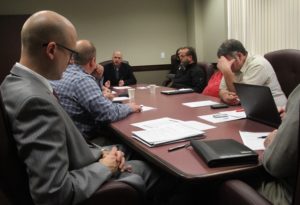 Snyder appears before the Ways and Means Committee.
(Photo/Conrad Baker)