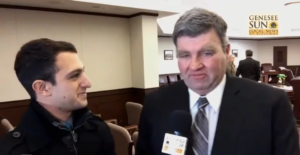 Sales tax is the largest source of revenue for the Livingston County government. For decades, New York State has returned the local share of sales tax (4%) directly to counties for their use.

Now, the State is using this revenue stream for their own spending needs and, in turn, shifting costs to counties through the theft of sales tax dollars.

New York State historically provided aid and incentives to municipalities – so-called AIM money – which essentially was general purpose state aid to, in Livingston County’s case, its 17 towns and 9 villages. Recently, New York created a new mandate whereby State resources are now swapped with county sales tax dollars as the source of AIM money.  The municipalities still get their “state aid” but the state is not paying for it – Livingston County is footing the bill.

Another new state mandate requires that counties redistribute some of their collected sales tax dollars to so-called distressed hospitals to help cover healthcare costs for patients on Medicaid.

As a result of these mandates, Livingston County officials expect an approximate $815,000 cash flow impact to the County’s 2021 budget.  “This is equivalent to stealing approximately $25 from the wallets of every individual taxpayer in this County,” stated David L. LeFeber, Chairman of the Livingston County Board of Supervisors. “When does the financial gimmickry stop?”

“It’s appalling,” stated Ian M. Coyle, Livingston County Administrator. “Not only is New York hoarding all of the Federal coronavirus stimulus money at the state level and not distributing it back to smaller counties as many states have done, but they are incredulously using more and more of our own local money for their needs to address their budget deficit.”

LeFeber also chastised the Governor and his administration for referring to the State’s present fiscal quagmire as “Donald Trump’s problem.”

“Enough with the deflection and lack of ownership,” LeFeber continued. “Own your budget deficits and stop playing games with the people of New York. Stop using local county dollars due counties – who are on the frontlines in this pandemic – for state expenses that have been in the state budget and a state obligation for years. Instead of the political theater, how about we work together – state and counties – in the push for Federal stimulus funds and other relief like changes to the Medicaid funding formula, but let’s do so absent the partisan nonsense, blame-shifting, and buck-passing.”