“Sheriff Dougherty has dedicated the personnel and resources necessary to maintain this important and significant status for the Livingston County Sheriff’s Office,” stated Chief Deputy Matthew Burgess of the Police Services Bureau. “His primary and often stated goal has been and continues to be to attain the highest levels of professional standards and quality of service in law enforcement to the residents of Livingston County.”

The release said that development and implementation of policies and procedures consistent with the highest professional standards in the United States has yielded 260 written regulations that have had a very positive effect on our members and the public we serve.

The release added that training of personnel is one of the most easily identifiable positive effects of the accreditation process. In 2017, police services personnel accrued 7,319 hours of in-service training collectively, averaging over 92 hours of training per person. This ongoing training has significantly increased professional development and improved response to demands for service from the public.

The Sheriff’s Office says that the accreditation process has ensured the quality of procedures utilized in screening, hiring and evaluating personnel. It has also propelled the Sheriff’s Office to implement the highest of standards and requirements for responsibility and accountability throughout our membership. Accreditation standards have significantly reduced litigations and reflect positively on county liability insurance premiums, and that perhaps the most significant result of the ‘Accredited Agency’ status has been the positive support and increased confidence received from the public, law enforcement agencies and legislative authorities.

“I thank the members for their hard work, dedication and buy-in to the accreditation program and wish to specifically recognize and thank Administrative Deputy to the Sheriff, Deputy Sheriff Gary Miller, who serves as accreditation program manager,” said Livingston County Sheriff Thomas Dougherty. “To be an accredited agency involves working tirelessly towards effective policies but even more so, living by those procedures and following them closely to enlist best practices. I am extremely proud that the Livingston County Sheriff’s Office is a professional, full service law enforcement agency that has continued a tradition of excellence since 1821.” 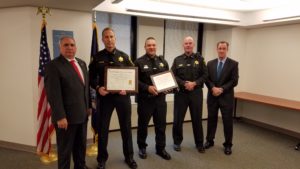