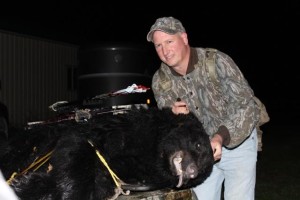 Scott Cripps with the bear he shot in Groveland. (Photo/ Glenn Staley)

According to the New York State Department of Environmental Conservation’s 2015 bear harvest results, Livingston County hunters took a total of seven black bears, the most ever recorded since bear hunting opened to the entire county in 2008.

Bowhunters took one bear in Groveland and one in West Sparta. Hunters in the regular gun season took one in Nunda, one in Ossian, one in Springwater, and two in Portage.

The runner-up hunting season was 2011, when hunters took six bears.

Ossian has become the county’s bear hunting honey hole recently. Hunters have bagged at least one bear in Ossian every year since 2009.

New York bear hunters took 1,715 black bears during the 2015 hunting season, the second largest bear harvest on record in New York. Only the 2003 harvest surpassed this take, with 1,863.