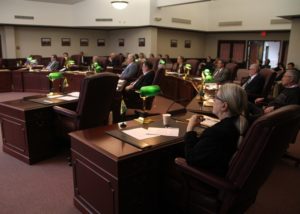 (Photo/The Board of Supervisors)

LIVINGSTON COUNTY – The County formally entered an agreement with Airbnb whereby the website and app will collect hotel-motel taxes from its users and pay them to the County.

At Wednesday’s Board of Supervisors meeting, the Board voted to enter a tax agreement with Airbnb, a website and app that allows private homeowners to rent rooms in their houses for short periods. Airbnb agreed to collect hotel-motel taxes from its users and pay them to Livingston County, but said that it cannot be held liable for users’ failure to pay the tax.

All but one Supervisor, Portage Town Supervisor Ivan Davis, voted in favor of the agreement.

County Attorney David Morris said that talks are underway to get other similar sites and apps to collect taxes for the County.

January has been a month of change for County hotel-motel tax law. This month, the Board voted to expand hotel-motel tax law to include sites like Airbnb which rent rooms for 14 days or less and Airbnb agreed to enter the tax collection agreement.

At Wednesday’s meeting, the Board passed a local law that eliminated complex legal language from past hotel-motel tax law, which the Board and its legal advisors found to be unnecessary.