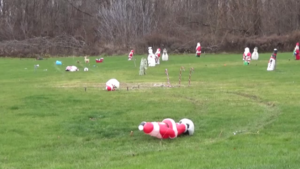 CONESUS – The local radio station in Avon and a lawn mowing company in Livonia are righting wrongs in the aftermath of Dec. 6’s vandalism of Christmas decorations at Ricky Greene Memorial Park.

In the days following the incident, Conesus Town Supervisor Brenda Donahue said that it was unclear whether the community children and firefighters would or could put the Christmas decorations up again. Spirits rose when a kind stranger put Ben’s Bells, little handmade bells with reminders to be intentionally kind, around the park. Then, Donahue received a surprise phone call.

“Shortly after the incident became public, I received a phone call from Bob Savage, owner of WYSL 1040,” said Donahue. “Mr. Savage informed me that the radio station would like to purchase a new Nativity Scene for the park. We were so touched by their generosity. This was initiated by Jim Quinn, morning show host who broadcasts from Pittsburgh. Jim offered to pay half of the cost of the Nativity Scene, which amounts to a very substantial donation. The other half was donated by the individuals who work at WYSL 1040.”

The gesture definitely seems to have hit home for Donahue.

“Jim Quinn had a vision, and planted the seed that quickly blossomed into a reality,” added Donahue. “It reminds me of one of my favorite children’s books. The book centers around a little girl named Rose. The story ends by saying ‘Rose is a girl who loves to dream. The world is a much better place because of this.’ I will say the same thing about Jim Quinn and all the folks who work at WYSL. The world of Ricky Greene Memorial Park is a much better place because of your vision.”

The generosity didn’t stop there. Soon, Donahue also received a call from Matt Cook, owner of Cook’s Lawnmowing and Landscaping, the Livonia business that mows the grass on the Town of Conesus’ property.

“Matt offered to repair the damage done to the park grounds at no cost in the spring,” said Donahue. “How generous! Christmas is alive and well in Conesus and the Grinch should take a lesson from these folks: Love triumphs!”

The Livingston County Sheriff’s Office is still investigating the vandalism. Anyone with information on the incident is asked to call (585)243-7100. 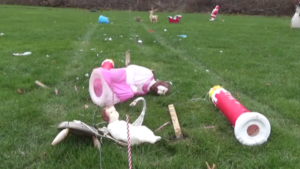