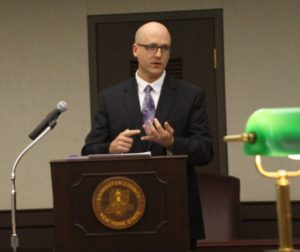 Coyle said that the proposed budget, which the Board of Supervisors will vote on at their next meeting, would increase Livingston County taxes by 1.45 percent.

About 30 students from a Livonia Central School class attended the budget proposal with many of Livingston County’s department heads.

Coyle said that this money allows Livingston County’s to offer services to its residents that are unparalleled in the state, and possibly the nation.

“With our 1,284 employees we deliver core services that in their entirety are not found anywhere else on the local government spectrum in New York State and I would argue in the U.S. in terms of how many services and the diversity of services,” said Coyle. “The service scope in our county is really second to none in the state.”

Still, Coyle added that every budget has its challenges. Over the past year, the County has suffered from low sales tax revenue, increased health care costs, and fluctuating federal and state funding and mandates. For example, during the same meeting on Wednesday, the Board of Supervisors begrudgingly approved a state-mandated $30,000 pay raise for the District Attorney, which the Board strongly opposed. The County will also have to expand its Public Defenders Office to accommodate increased case loads now that the state has increased the minimum requirements to qualify for the Public Defender.

“No budget is perfect, no budget is without its challenges,” said Coyle. “Some are opportunities when they present themselves and some are just straight-up challenges that we need to work through and work around.

‘There was a 3 percent sales tax increase for 25 years until the recession, which never really recovered. About 20 percent of our sales tax are gas sales and prices are down at the pump.

‘We haven’t seen huge health care cost increases from the Affordable Care Act, but about 1,800 lives are covered by Livingston County due to employees’ dependents and spouses. When it’s an $8 million expenditure for us, even if it’s a 10 percent increase that’s still sizeable.

‘The Federal government affects the state which affects the county. The Affordable Care Act and infrastructure spending certainly affects us. State mandates have been our biggest challenge. The state puts their budget together after we put our budget together, so we don’t know what they’re going to do with reimbursement levels or funding levels. It’s an important thing for us to watch in the first quarter of the next year.”

“We’re blessed with the fact that we have available dollars to provide a match for that program and that will create a nice influx of dollars to the nursing home operation which will hopefully buoy its sustainability long-term with federal dollars.”

Coyle said that despite its challenges, the County is in better financial shape than some higher levels of government.

“Certainly over the years the federal government and the state government have not produced what I would call a balanced budget,” said Coyle. “This county budget is a balanced budget. That means expenditures meet revenues and vice versa. It’s also stable in terms of any fluctuations. We don’t have any major program additions or deletions, and it’s fairly status quo. I would say that the status quo in this county is OK and acceptable. This budget doesn’t have gimmicks or frills and at the end of the day it’s focused on results. Results for the residents, results for our visitors and for our staff.” 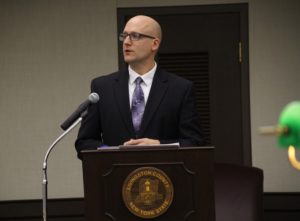