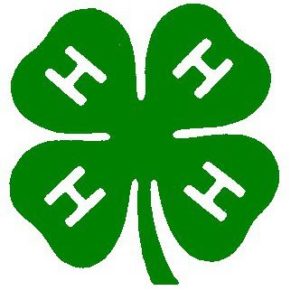 The Livingston County 4-H Booth at the NYS Fair revealed all of the talent within our county, with 48 exhibits from youth ranging in age from 8-18 and 26 photographed exhibits from Cloverbud members (ages 5-7).

This year, Livingston County combined efforts with Wyoming and Ontario Counties to create a larger shared display, showcasing the talent from all three counties.

Having an exhibit selected for State Fair is a wonderful accomplishment in and of itself, and results from judging at this year’s fair only confirmed the talent we have in our program. Altogether, Livingston County received 38 blue, 9 red, and 1 white ribbon. The county also received 26 participation ribbons.

A Purple Rosette, an honor exemplifying outstanding work, was awarded to 3 exhibits from Livingston County. Congratulations to Alyssa Healy and Leah Tilson on their individual Rosettes as well the group exhibit from members Isabelle Dennis, Lily Garrity, Alyssa Healy, and Molly Milliken for receiving this honor.

Our booth received many compliments from fairgoers, who could see the effort that went into creating the exhibits. Leah Tilson’s drawing entitled “Charm” received several compliments over the course of the fair and even had an offer to buy it. Other exhibits attracting attention from fairgoers included a unique planter of variegated plants created by Teagan Werner and Turtle Topiary featuring assorted succulents by Lucy Sexton.

Teen Leaders Lily Garrity and Alyssa Healy helped with judging in the areas of Science and Technology, Fine Arts and Communications – allowing them to learn more in these areas while developing leadership skills. Aydan Low worked with Ron Niedermaier in the Sustainability Booth, encouraging fairgoers to ride the energy bike to see if they could produce enough power to light up several lightbulbs and make a blender run.

Aydan Low and Rian de Wit both competed in the Chicken BBQ contest, grilling up some delicious chicken in additional to sharing a presentation about the poultry industry in the United States.

Audrey de Wit took part in the Egg Preparation Contest. This included a demonstration of an egg-based recipe along with a presentation about egg production in the United States, but done together within a 12 minute timeframe!

Reid Shutt wowed the crowd during his Produced in New York Food Demonstration. He showcased goat meat as an alternative to beef and made Goat Enchiladas.

Congratulations to all of the exhibitors! 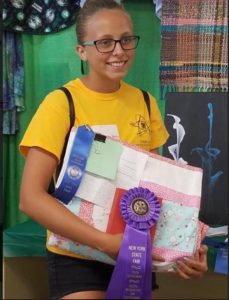 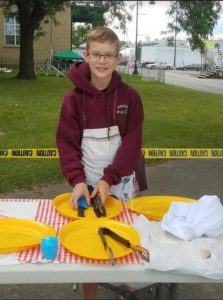