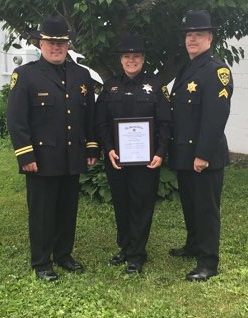 LIVINGSTON COUNTY — A Livingston County  Sheriff Deputy received the 2018 New York State American Legion Correction Officer of the Year Award and other local recognitions for her lifesaving efforts on an inmate.

“I am very proud of Deputy Clark-Pierson for the awards she received in recognition of this life-saving incident,” said Sheriff Dougherty. “It is great to see a member of the Livingston County Sheriff’s Office receiving a statewide award. Often the members of the Jail Division do not get the Recognition they deserve for the very difficult job they perform.”

Deputy Clark-Pierson is a 10 year veteran of the Correctional Services Bureau of the Sheriff’s Office. She serves as the unit commander of the fire brigade and is responsible for many of the safety features of the facility as well as training of the fire brigade members and all jail deputies.