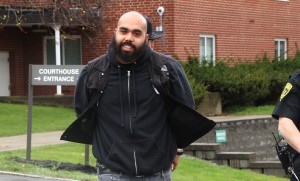 LIVINGSTON COUNTY – A Rochester man who pled guilty to all charges for a robbery in Caledonia clearly communicated his spite for the court, the criminal justice system, reporters, and the codefendant who agreed to testify against him.

Josue ‘JQ’ Quinones, 24, was sentenced to 5 years in prison and 5 years on parole for felony Robbery in the Second Degree against the recommendation of Assistant District Attorney Josh Tonra, who requested 7 years. Quinones called out the court and the criminal justice system for being unjust.

“Nobody in this courtroom can break me,” said Quinones. “This county cannot break me. […] I’ll still be Josue. Nobody in a gown or uniform with a badge can break that. If you think you will never see me again, know that Josue Quinones will be back in Livingston County.”

“Thank you Livingston County, investigator Rittenhouse, and Judge Wiggins for showing me the rats around me,” said Quinones. “I am taking my time like a man, my woman is taking her time, but Ben chose a different option.”

The robbery occurred on July 30, 2015 when Ortiz located a friend of hers from Avon who owed her less than $30, apparently for an illegal marijuana sale, and invited him to get in a vehicle with herself, Quinones, Brown, and Adams for a ride to Rochester. According to Brown’s testimony during his guilty plea, Quinones drove them to Lacey Road in Caledonia, slapped and punched the victim a few times, and took cash from him.

Quinones’ attorney, Raymond Sciarrino, expressed his confidence that his client will have a bright future after his release from prison.

“Josue and I have gotten to know one another over the last few months,” said Sciarrino. “He accepts responsibility. He is a young man with many years ahead of him. He has made some mistakes along the way but he is a very intelligent young man.”

“I believe it when your attorney says that you’re an intelligent man,” said Judge Wiggins. “Courts and judges don’t have as much discretion as some people apparently think. […] I do hope you come back to Livingston County, be productive and do what you’re supposed to do and take care of your family. You are welcome in this county.”

Quinones could be heard shouting profanities at Brown in the courthouse holding area after Livingston County Sheriff’s Deputies took him into custody.

Quinones shouted profanities at reporters while Deputies led him from court to the Livingston County Jail.