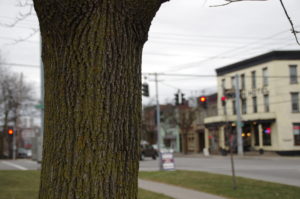 This spring, the highway crew will begin examining existing Ash trees to determine which ones will need to be removed.

“We usually try doing them throughout the spring and summer, and we do it as we can get to them, as we notice them,” said Village Superintendent of Public Works, Ben Luft. “Once spring comes and all the trees leaf up, obviously the ones that aren’t leafing, we go look at them and address them then.”

Removed ash are then chipped up and spread in a landfill to break down in order to prevent any potential spread of the EAB.

Approximately 15 infected trees were removed in 2016, Luft said. A Preliminary Ash tree Inventory, coordinated by the Livingston County Planning Department in 2010, stated that the village of Lima contained 84 Ash trees in the right-of-ways, municipal parks and county properties.

Not all of those trees are infected. According to Luft, the highest density of those Ash trees exist on West Main Street.

Luft stated that the town will be giving residents the option to have a native tree such as a cherry kwanza or white dogwood planted in order to replace removed Ash trees. The crew does their best to keep in contact with residents throughout the whole process.

“What I do is talk to the home owners and let them know which trees are coming down and then I ask them if they’d like a tree to be replaced,” Luft said. Replacement trees are typically planted within a week or two of the ash removal.