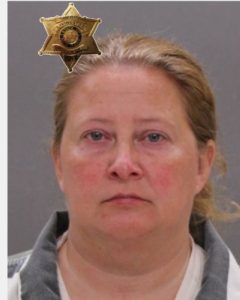 Sheriff Thomas J. Dougherty reports the arrest of a Lima resident on felony DWI charges following a traffic stop.  On May 21, 2021 at approximately 11:10pm, Deputy Cheyenne Masiello was assigned to the Sheriff’s Office STOP DWI Unit when she conducted a traffic stop with a vehicle on Clay Street, in the Town of Lima, for a violation of the NYS Vehicle and Traffic Law.  The operator of the vehicle was identified as Marilee A. Hoffman, age 42 from Lima, NY. During the stop, the Deputy Sheriff suspected that Hoffman was under the influence of alcohol. The Deputy
Sheriff did conduct a DWI investigation which included the performance of standardized field sobriety tests. At the conclusion of the roadside investigation, Hoffman was taken into custody for DWI.  During the investigation, it was also discovered that Hoffman did have a passenger in the vehicle that was under the age of sixteen (16) years old.

Hoffman was then transported to the Sheriff’s Office sub-station in Lakeville, where she was offered a breathalyzer to determine her blood alcohol content (BAC). Deputy Michael Phillips did administer the test which revealed that Hoffman had a blood alcohol content (BAC) of .14%.  Hoffman was arrested and charged with felony Aggravated Driving While Intoxicated (Leandra’s
Law), Endangering the Welfare of a Child, as well additional Violations of the NYS Vehicle & Traffic Law.