LIMA – The Livingston County Sheriff’s Office arrested a Lima resident on a felony charge for allegedly stealing from a neighbor’s garage.

According to a press release from Livingston County Sheriff Thomas Dougherty, Jenna Craft, 36, was arrested for felony Burglary in the Third Degree and misdemeanor Petit Larceny.

On Aug. 24, Sheriff Deputies were called to a residence on Lake Avenue on the Village of Lima where the homeowner reported items missing out of the garage over the course of the last few months.

Through the investigation, deputies identified Craft as a suspect and allegedly recovered the stolen property. The total value of items taken is alleged to be less than $1,000.

Handling the investigation for the Sheriff’s Office was Investigator Josh Monster, Deputy Jason Butterbrodt, and Deputy Scott Patterson from the Forensic Identification Unit.

Craft was taken to Central Booking at the Livingston County Jail where she was held on pre-arraignment detention. 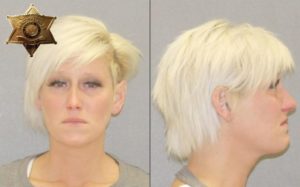