LIMA – Norm Caccamise stepped down as ambulance Rescue Captain after 35 years serving in that position.

In a note submitted to the Town Board, Caccamise said that he hopes to provide someone else the opportunity to bring new ideas to drive the ambulance forward.

“He’s going to be a big loss,” said Town Supervisor Pete Yendell, who is a Lima firefighter. “He’s held that core together for 35 years and he was a driver medic 5 years before that.”

Caccamise’ role will be handed off to Scott Domuracki and assistant Michael Finucane. In addition to serving as the Hemlock fire chief in the late 1990’s, Domuracki stated that he spent time with the Livonia ambulance and has been a member of Lima’s ambulance since 2011.

As for new ideas, Domuracki said boosting volunteer numbers will be a primary goal as he steps into his new role.

“I’d like us to continue to move forward and maybe grow our membership a little bit, have more people giving us a hand and helping out around the town,” said Domuracki. 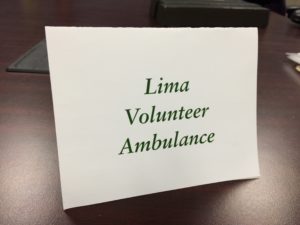