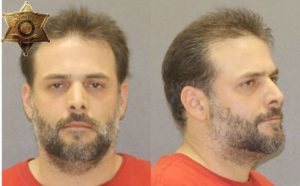 LIMA – A Lima jury returned a guilty verdict on Thursday against a Lima man who blew through a safety checkpoint, nearly striking two Livingston County Deputy Sheriffs, in July 2016.

“I will be asking the judge to sentence Mr. Commanda to a period of incarceration,” said Assistant District Attorney Ashley Weiss, who prosecuted the case for the People.

Testimony for the People was that Deputies Connor Sanford and Brendan Flickner were at a checkpoint on Rte. 15A on July 5, 2016, when a Jeep Cherokee ran through the checkpoint at what they estimated was 60 mph. Flickner said that he had to jump out of the way.

The two Deputies got into their patrol vehicles and pulled the vehicle over, but Commanda would not produce his driver’s license or step out of his Jeep. Sgt. Matthew Orman was called to the scene. He told Commanda that he was being charged with several crimes and would be forcibly removed from the vehicle if necessary. Commanda then exited the vehicle.

Commanda was charged with Endangering the Welfare of a Child because he had his 6-year-old son in the vehicle.

Justice Elvira Luhowy released Commanda on his own recognizance, with no bail required, after trial. Judge Luhowy adjourned the case to a later date for sentencing.

Commanda was represented at trial by attorney James McCann.