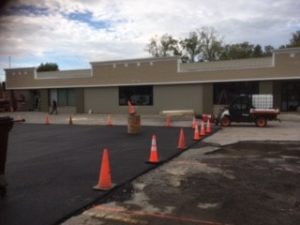 There will be a new Lima Family Dollar/Dollar Tree Store located in the renovated building at 7277 West Main St. Lima. A pre-Christmas opening is planned. This picture was taken Oct. 22, but progress on the renovation is quickly progressing every day.

Lima is seeing much progress on the former Milburn’s Big M building, 7277 West Main St., Lima, which, in October, was reroofed, had major façade renovation and the parking lot repaved, and new lighting.  The building will be the home of the Family Dollar/Dollar Tree Store, which is scheduled to open in December, in time for Christmas.

According to builder David Muraco, “we hope to have the building ready to go on Dec. 1, but the dollar stores are having the same problems with getting supplies and inventory that we are having, since a lot of those things are from other countries, and are now stuck on ships; but we’re hoping for a before-Christmas opening.”

Family Dollar bought out the Dollar Tree chain, making it the second largest “dollar” store in the nation. The Lima store will be dual branded. Ther will  also be a 4000 sq. ft. space in the same building, to be leased to another tenant.

“We don’t know specifically who that tenant will be yet,” said Muraco. “We’ve had several people looking, everything from an Urgent Care space to a national restaurant chain.”

Muraco mentioned that, as soon as the Lima store is completed, he plans to begin a build in Perry, in a former Walgreens building near the Perry High School, 128 North Center St.  He is hoping to renovate that building also into a Family Dollar store, but plans are not yet final.