CASTILE – The ice volcano that made national headlines in 2015 is again in the spotlight as the sustained arctic temperatures promise to preserve its growth for several days.

Park visitors are already stopping to take photos and videos of the volcano, which is really just a fountain that stays on through the winter and occasionally freezes into these big pillars.

Temperatures are supposed to be below 20 degrees, on some days well below 20.

The famous ice volcano of 2015 grew in the record cold temperatures of that February. 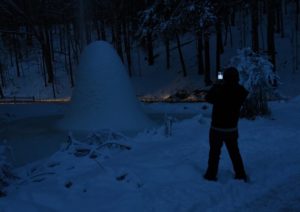