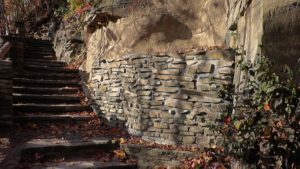 LIVINGSTON COUNTY – Letchworth State Park’s trail leading to the upper falls is back open after more than seven months behind barricades.

One of the park’s most frequent visitors and most prolific photographers, Ken Wallace, took several photos and a video clip showing the improvements.

think that would be very interesting to a lot of your readers. They closed that trail down in early spring (March, if I remember correctly) and officially opened it back up yesterday. I am not sure how much of this trail will be open before the bridge project is completed in December 2018. I was able to go all the way up to the barricade that closes it off from the main Park Road. I’m sure they won’t want tourists to go up that far once the bridge work to take down the old trestle begins.

“Now that the trail to the Upper Falls is once again open after being closed for several months to refurbish it, I was anxious to take a walk on it this morning even though it was cold and rainy out,” posted Wallace. “The video is a bit shaky at times as I was shivering a little from the icy cold mist and rain hitting me. This video gives you a really nice up close look at the old trestle which will soon be coming down, and the new arch bridge behind the old trestle.”

The trail is still near one of the biggest construction projects ever to come to the park, the railroad bridge and rail extension above upper falls. Portions of it may still be blocked in the future, especially when the old trestle bridge is removed.

“You will notice that there is a ballast train stopped on the old trestle,” posted Wallace. “I was told that they were transferring ballast stone by use of a conveyor from the ballast cars to the new bridge. A distance of roughly 75 feet!”

Some of Wallace’s fans and social media followers said they’re glad to see the trail get fixed up.

“Looks like they’ve done a lot of work to repair and protect against further erosion/collapse,” posted Michael Goodliff. “I remember walking through there a few years ago before the bridge project started and was amazed at how much it had deteriorated. Glad to see they’re taking the chance to fix it while they had it closed.” 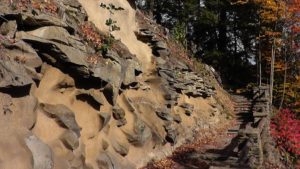 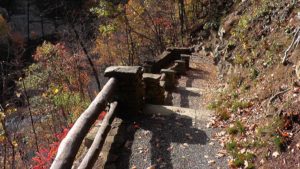 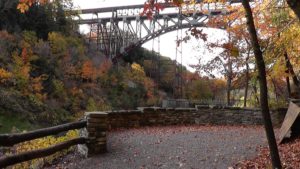