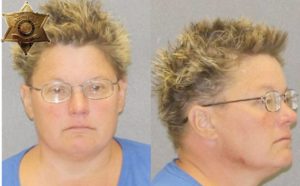 LEICESTER – The Livingston County Sheriff’s Office arrested a Leicester resident on felony charges for allegedly possessing property that was stolen in Batavia.

According to a press release from Sheriff Thomas Dougherty, Kim Diamond, 47, was arrested for felony Criminal Possession of Stolen Property in the Third Degree.

In March of 2016, Sheriff’s Investigators assigned to the Criminal Investigations Division assisted the Batavia Police Department in executing a search warrant at a residence in the Town of Leicester. During that search, stolen property was recovered that had been reported stolen to the Batavia Police.

Over the course of the past few months, the property has been identified and valued which is why the arrest was delayed. The value was placed at more than $11,500. The Batavia Police Department was not immediately available for comment as to what the property was.

Diamond was arrested and transported to Central Booking at the Livingston County Jail for processing and pre-arraignment detention.

Geneseo Town Justice Kathleen Houston arraigned Diamond on July 14 and went along with the recommendation of Livingston County District Attorney Greg McCaffrey to release her on her own recognizance. She is expected to be charged by the Batavia City Police Department.