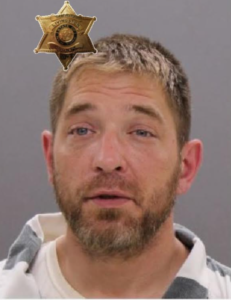 Sheriff Thomas J. Dougherty reports the arrest of a Leicester resident on a felony charge following an investigation by the Sheriff’s Office.  On June 1st, 2021, at approximately 9:30am, Deputy Martin Herkimer responded to an address on Mount Morris Road, in the Town of Leicester, for the reported violation of an order of protection.  The investigation revealed that 40 year old Matthew J. Sapetko had been contacting a female individual who was a protected party in an active complete stay-away order of protection placed against Sapetko. During this contact with the female, Sapetko also directed threats of harm toward the individual.  Sapetko was arrested and charged with felony Criminal Contempt in the First Degree and Aggravated Harassment in the Second Degree.

Sapetko was transported and turned over to Central Booking Deputies at the Livingston County Jail for processing and pre-arraignment detention. The District Attorney’s Office was contacted in regards to bail due to the felony level charges. It was recommended that Sapetko be held without the possibility of bail due to Sapetko having two (2) previous felony convictions.  Sapetko was later arraigned at the Livingston County Centralized Arraignment Part (LC-CAP) at the Livingston County Jail before Town of Caledonia Justice Mark Riggi. The Judge did remand Sapetko
to the custody of the Sheriff without the possibility of bail to be held for further court proceedings.