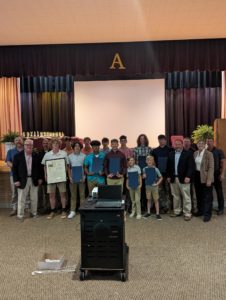 O’Mara, Palmesano and Byrnes were on hand at Wednesday night’s Athletics Ceremony in the Avoca Auditorium to present an official Legislative Resolution (J2191/K00702) to this year’s Section V champions.

In a joint statement, O’Mara, Palmesano and Byrnes said, “We appreciate these opportunities to recognize dedication, excellence, hard work and success throughout our school communities.  For these outstanding high school student-athletes, it doesn’t get better than a perfect season ending in a state championship.  The Avoca/Prattsburgh boys varsity basketball state champs have been on an amazing, undefeated run over the past two years.   They have brought excitement and pride to their families and friends, the community at large, and our entire region.”

Athletic Director Cody Delles said, “Thank you so much to Assemblyman Palmesano, Assemblywoman Byrnes, and Senator Tom O’Mara for taking time out of their night, and away from their families, to recognize our Boys Varsity Basketball team at our Athletic Awards Ceremony. It’s a little strange to look back on all of the accomplishments with fresher eyes, because during the season, you’re always setting your sights on the next goal. This group of boys did the unthinkable, and it’s something we don’t take lightly as it’s not a common occurrence for Avoca and Prattsburgh. The coaching staff did a fantastic job of refining the vision and selling it to every member of the team, and that’s what led to their perfect season. Well done coaches and student-athletes of the Avoca-Prattsburgh Boys Varsity Basketball Team!”

Head Coach Brian Putnam said, “I could not be more proud of this group of student-athletes.  The way they represented themselves, their families, communities, schools, and their team was incredible.  This has been the most unselfish group of young men I have ever worked with.  I would just like to thank them for the ride that they have taken us all on, and to the seniors best of luck on whatever comes next in your lives.”

Avoca Superintendent Stephen Saxton said, “The vision for a combined athletic program began several years ago when then Prattsburgh Superintendent Jeff Black recognized that as our school enrollments dropped the opportunities for our student athletes would dwindle.  He knew we would have to do something different and the seed was planted.  Many conversations and several years later our communities have officially come together to provide student athletes with the opportunity to learn, grow, excel, lead, at the highest of levels.  The 2021-2022 student athletes of Avoca-Prattsburgh, most notably our NYS Champion Boys Basketball Team, have shown with remarkable success how important this shared opportunity has been for our communities.”

Prattsburgh Superintendent Kory Bay said, “We are extremely proud of the way that two schools and school communities came together to accomplish something so rare and awesome. The perfect season capped off with a state championship is something that is a source of pride for everyone in both communities. Most importantly, this is a group of student-athletes and coaches that represented both Avoca and Prattsburgh communities with class on and off the court. I am just thankful that I was able to go along for the ride with them!”

The joint Senate-Assembly resolution sponsored by O’Mara, Palmesano and Byrnes reads, in part, “Individual and team championships are highly sought after in high school sports; this Legislative Body commends rare athletic achievements and pays special recognition to those who pursue such excellence and become examples for the youth of this great Empire State.”