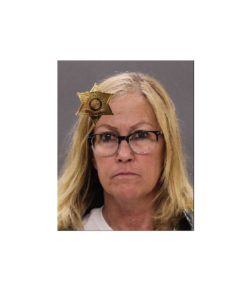 Sheriff Thomas J. Dougherty reports the arrest of a Livonia resident on felony DWI and weapons charges  following an investigation.

On May 3rd, 2022 at approximately 5:45pm, Deputy Justin Hilt was assigned to the Sheriff’s Office STOP DWI Unit  when he responded to a traffic complaint of an intoxicated driver at the Livonia Central Schools.

Deputy Hilt arrived on location and located the vehicle, identifying the operator as Lisa M. Minery, age 55 from Livonia,  NY. During the encounter, the Deputy Sheriff suspected that Minery was under the influence of alcohol. The Deputy  Sheriff did conduct a DWI investigation which included the performance of standardized field sobriety tests. At the  conclusion of the roadside investigation, Minery was taken into custody for DWI.

During the investigation, it was also discovered that Minery did have a passenger in the vehicle that was under the age of  sixteen (16) years old.

It was also discovered during the investigation that Minery did have a loaded handgun in her possession while on school  grounds.

Minery was arrested and charged with felony Aggravated Driving While Intoxicated (Leandra’s Law), Endangering the  Welfare of a Child, and felony Criminal Possession of a Weapon on school grounds.

Minery was transported and turned over to Central Booking Deputies at the Livingston County Jail for processing and  pre-arraignment detention. The offenses did qualify for arraignment as the Judge can invoke driving restrictions however,  the Judge cannot set bail under the NYS Justice Reform Act.