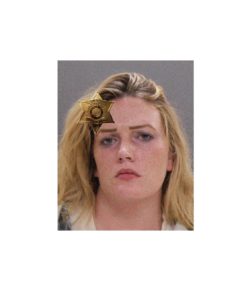 Sheriff Thomas J. Dougherty reports the arrest of a Springwater resident on felony DWI charges following an investigation by the Sheriff’s Office.

On June 13, 2022 at approximately 4:15pm Sheriff’s Deputies and EMS responded to the Airport Plaza, in the Town of North Dansville, for the report of a female unconscious and slumped over the steering wheel with the vehicle running and a small child in the rear seat.
Deputies arrived and identified the operator of the vehicle as Megan R. Koch, age 37 from Springwater, NY. Koch was evaluated on location by EMS and ultimately signed off any medical assistance. During the encounter, Deputies suspected that Koch was under the influence of something other than alcohol, which prompted a Driving While Ability Impaired by Drugs investigation. Deputy Dylan Bowser, who was assigned to the Sheriff’s Office STOP DWI Unit, did respond to conduct a DWAI investigation which included the performance of standardized field sobriety tests. At the conclusion of the roadside investigation, Koch was taken into custody for DWAI Drugs.
Koch was then transported to the Sheriff’s Office Headquarters in Geneseo where Sergeant James Merrick, a certified Drug Recognition Expert (DRE), conducted a drug evaluation. It was the Sergeant’s expert opinion that Koch was under the influence of a Narcotic Analgesic and a CNS Stimulant and that she could not operate a motor vehicle in a safe manner.

During the investigation, it was also discovered that Koch did have a passenger that was 20 months old in her vehicle making this arrest a felony.

Koch was transported and turned over to Central Booking Deputies at the Livingston County Jail for processing and pre-arraignment detention. The offenses did qualify for arraignment as the Judge can invoke driving restrictions however, the Judge cannot set bail under the NYS Justice Reform Act.