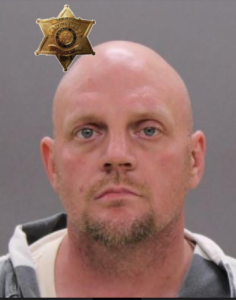 An Avon Landpro truck that went missing on May 13 has been recovered, and the employee who drove off in it was arrested on May 20, after a  brief foot chase near the Letchworth Country Store, Mt. Morris.
John H. Washburn, 44, drove off in the Ford 550 rollback on the morning of May 13 with a John Deere lawnmower that he was delivering to Canisteo. After delivering the lawnmower, the truck never returned to Landpro, and it was noticed that a GPS system which had been in the truck and Washburn’s personal phone were still at Landpro. A Landpro phone in the truck was “pinged” in Rochester.
On May 20, a report came into Landpro that one of their trucks was speeding in Dansville, and they had no trucks that were scheduled to be there, so thought the speeding truck might be the stolen one, and could be in Dansville. Deputies later identified the driver of another vehicle pulling off Exit 7 near Mt. Morris as Washburn, and pulled the vehicle over at the Letchworth Country Store near Mt. Morris.  The officer told Washburn to get out of the vehicle. He refused and put the truck in “drive” and drove off the paved parking lot and into the grass behind the gas station, followed by deputies, until the vehicle became disabled. He got out, clutching a few items, and attempted to run, but the responding officer told him several times to stop, and then gave chase and tackled Washburn to the ground. Washburn continued to resist arrest, but with the help of other officers, was finally handcuffed and taken into custody. Among the items he was carrying when tackled were 3 purple bags of suspected cocaine and a cocaine stem, so a field drug test was conducted. He was also checked for injuries, and Washburn said he was fine and declined any medical check ups, so was taken to the Livingston County Jail.
Washburn was remanded without bail, due to the felony vehicle theft, drug charges, and other previous felony arrests.
The Landpro truck was recovered, but had significant damage to the interior upholstery in the cab.